Growing up I always felt soups to be fancy stuff! Infact, I still do now, but that's another topic. But there have been many times, when we have indulged in some soupy affairs. Amma, makes excellent Vegetarian soups. My favorite, pick me up one would always be her Carrot Soup. Thinking about soup, I was really amazed that Soups have never really featured much on my blog. The only soup that I have featured is my Sweet Corn Soup, my most favorite.
Actually I don't take anything else, other than Sweet Corn Soup. I have always felt drinking soup kills my appetite, yeah you heard me right. Why would I want to drink soup when I would be eagerly waiting for my paneer starters and then my paneer kulcha or paneer butter masalas to come! But there have been occasions when we have indulged in lengthy dinners that these featured too. Now if we ever venture out for dinners, it's always one person to his own food! Which is not how I like, so we don't go out at all.
Recently when we thought it's high time, we take the kids out, we decided on a Chick King joint that's close to our place. We choose that because it had a kids corner. We landed there by 8.30 pm and it was so crowded with kids. Konda, of course knew this place and was all excited. So it was such a pleasant feeling seeing the twins enjoying it. They had the sliders, swings and many other things to keep the kids occupied. But the other kids were kind of older and very naughty.
One girl was rude enough to push both these little ones aside, and Chinnu almost fell down, while Peddu was pushed. Next moment, we saw Peddu charging to that girl and he didn't rest till he was satisfied pulling her pigtail and hitting her. I had great difficult pulling him away from her. I know it's wrong, but I was trilled that Peddu knows to defend himself and can take care of his brother too. Konda, on the other hand, would always come running back crying and complaining to me. I was happy that I don't have to be the over protective motherhen afterall! 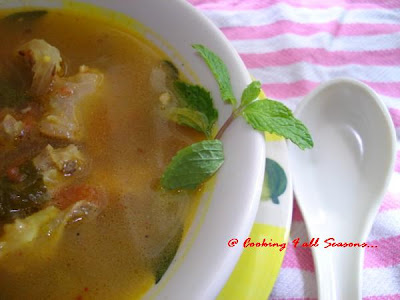 Coming back to this soupy thing, it was an interesting blend of spices and herbs. We make soups out of meat, generally for kids. During pregnancy, or recuperating, these meat soups are much sought out. I was taking lot of Carrot soups, Tomato or Mint soups during my pregnancy. And this was on request from hubby that I make for my kids. Though it was on spicy side they liked sipping on this.
Ingredients Needed: 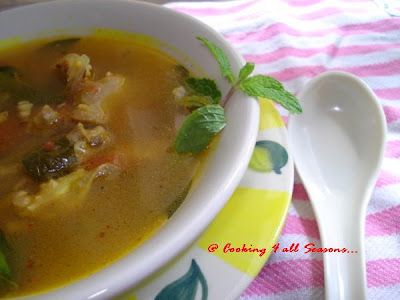 Method to prepare:
Chop the onions, Tomatoes, mint and coriander to fine pieces. Keep half of the onions for seasoning.
Place all the ingredients, except the seasoning items, in a pressure cooker. Put it for 4-5 whistles.
Once the pressure is off, heat the ghee. Sauté the onions, curry leaves. Once the onions are pink, add the boiled Mutton bones along with the other ingredients. Sprinkle more pepper powder based on your spiciness.
Bring to boil and remove and serve. If you want to you can strain all the ingredients and serve just the clear soup. Since all these were pressure cooked with the meat, its juice and spices would have steeped to the liquid.
This soup is quite spicy, so adjust the chili powder, Clove and Peppercorns as per taste.
Else as such it makes very solid soup. Very filling for a early dinner or for a light one.
I am sending this to Meeta's Monthly Mingle, this months being Bollywood Cooking. I thought this would make a perfect Bollywood star! Infact I have a book that features many of the famous Stars and their own recipes and I wanted to cook something from that! But there is nothing like our own dish alluring to them right!
And since this lets out lovely taste of the clove, this also goes to, yes you guess it right, I am sending this to Gretchen, who is hosting this month's Think Spice themed on Cloves, an event started by our dear Sunita!