During family gatherings or reunions, there is always so much merry and fun. Food always plays a central role during such occasions. When our relatives come down to visit us, hubby dear and I always sit down to plan what to cook during that period. We always plan and buy things ahead and do the prep work in advance so that I don't get vexed at the last moment.

This time when we visited our sils place, it was the same scene. Lot of planning went in as to what to be made. Especially if it's a meat eating crowd you can imagine, everything revolves around meat preparation. I end up being the only Vegetarian in the whole crowd, still my sils make something special for me. This time being Sankranthi, non veg is mostly prepared the day after the main festival. My BIL cooks very well and was entrusted with the task of making two main dishes, while another Aunt was asked to make Keema Balls and gravy.

I have heard so much about those Keema balls that his Aunt used to make, that I was happy that I could see her make in person. The special feast was to be for lunch and preparation started well in advance. I geared up with my camera and told that I would not miss any action in the whole process. They were really amused at the way I was going on clicking every action.

Though I have blogged about some of the authentic Mutton curry or Chicken Pulusu, these two were made differently and I was only glad that I could take notes and click pictures. My only sole role was taking pictures set in a dim kitchen. I tried my best to get maximum lighting but couldn't help much as it was a crowded kitchen, with about four to five different dishes were made.

For the Mutton Gravy, the ground masala was added as such. While for Chicken Roast, Mint leaves were added along with chicken masala powder.

For the Masala Annam, which my sil is very famous at making, mint leaves were added separately and onions were not ground.

For the Keema Ball, green chilies were not added.

so basically if you understand, this is a versatile masala that can lead great taste to the dish that's prepared.

Try grinding with very less water so that you can refrigerate for a longer period. To what I have seen, this paste is stored for a week. 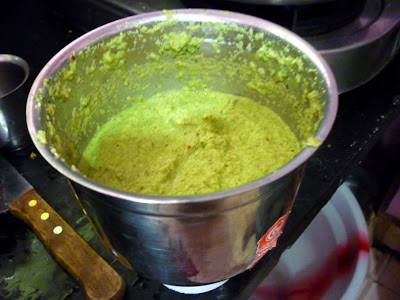 How to make the paste:

Wash and prep the ingredients.

While making the non dish you can add mint leaves. 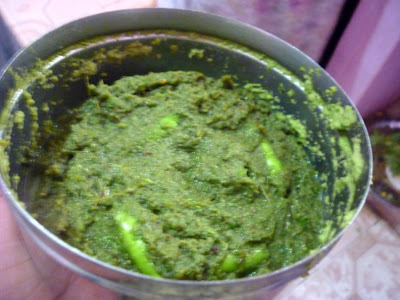 How to make the paste

Wash and pick the leaves, let it drain. Grate the coconut.

In a mixer, take all the ingredients and grind to a thick paste, using water sparingly.

This can be stored in fridge for a week if you don't use much water.

For making the rice you can use about 2 -3 tbsp

Will be back with the recipes for the dishes that were featured.