After what was a nomad life for the better half of the month, we are back to our routine with Athamma returning from her trip. I think she cut short her trip because of the simple fact that Chinnu refused to speak to her over the phone. While Peddu tried enticing her by promising never to ask for endless cups of Bourn vita to be eaten as snack or bullying her, Chinnu did a stunt of not talking to her. I tell you my boys know how to get their Nanamma back home.  As Konda is busy with her Summer activities that involves painting, swimming and stitching, she is not aware much of other things. For which I am thankful..:)

For those of you who wanted to know the progress of my book, well I finally was able to install the software to do the design. I can confess enough how much of a stress it was, trying to lay hands on the software to do the designing. When I finally installed it successfully, I was feeling so light as if I have the entire part done. Well I know the big work starts now. On the recipe part, I am so tempted to include so many but will again have to audit on how many to take in and include for later.

Coming to the recipe for the day, it is a sweet dish that Amma made the other day after getting inspired by the telly. There are so many cookery shows in the TV these days that one can get worked up seeing so many aired at the same time. Most times it will be a fun thing watching Athamma or Amma trying to watch all the shows in one go. They check out one show, if it is not good, switch to the other. They simply watch for the fun of shows as most never get to be done nor even being jotted down. But they do attempt at dishes when it calls for ingredients that are readily available with them like this one. Amma adapted this to suit her way of cooking. 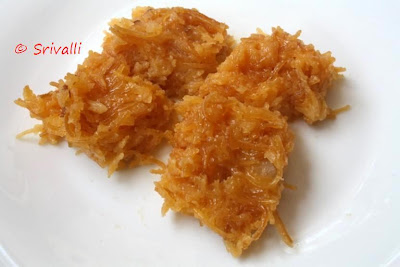 Heat a pan with ghee and roast the vermicelli till golden in colour. Keep it aside. Then roast the nuts, raisins and remove.

Boil the milk and add the vermicelli, simmer till done.

Add sugar and stir well to get the sugar dissolved. Simmer and continue to cook till the vermicelli is done and the milk is all evaporated.

At this stage add the grated coconut and mix well. When you find the mix is coming together, you can add the roasted nuts and raisins.

Grease a plate with ghee and quickly spread this mix over it. Cut into diamond shaped Burfis and decorate with nuts if you want.

This made a good one to make when you are in a hurry as it gets done really fast.

Silky temptation of thin finely roasted Vermicelli, cooked over slow flame with milk boiling to thickness though not enough to cut through with knife, sweeten with a bowlful of sugary granules, thicken with pristine white, flowery coconut that was grated with a swollen elbow, that tastes to juicy if you sneak in between the cooking, crowned with jewels enough to put a ruby to shame, that swam in a hot oil to balloon twice its size and with a nutty taste of the cashews in between. If you had removed a while before it would have been called kheer, a moment later it evolves itself as The Burfi!
Well wondering what all this is about! Sra and Nandini tempted me to describe food that was cooked, this is the best I could've get at..:)